How Ozone Disinfects the Filtered Water in your Bottle-less Cooler

Ozone is a naturally occurring disinfectant that is composed of three oxygen molecules. It is, in fact, anaturally occurring, colorless gas that is formed in the uppermost levels of the atmosphere when oxygen molecules are struck by ultra-violet light and divided into individual O1 atoms.When three of these individual atoms combine temporarily O3, otherwise known as ozone, is the result. Ozone is also created in lower atmospheric levels during electric storms and is the source of that clean, fresh smell that only perfumes the air after an electric storm has occurred.

Ozone is actually a very unstable gas that is quick to form and quick to dissipate – once it is produced, ozone has a half life of just 10-20 minutes in ambient (normal) conditions, which means it has to be electrically generated at the time disinfection is required since it cannot be stored for later use.

Ozone disinfects by being very quick to give up an oxygen atom when it comes into contact with organic matter causing the other two atoms to revert to their original O2(oxygen)status. If ozone is introduced into water it quickly reacts with any viruses, mold spores and the membranes of any microbes present in solution, disrupting their DNA and RNA structures, causing them to oxidise and killing them in the process.

Ozone also attacks microbial bio-film, causing it to biodegrade in much the same way as it does with polysaccharides. The great advantage of introducing ozone to water is that it does not leave any noxious chemical residues (the only residue is oxygen itself). 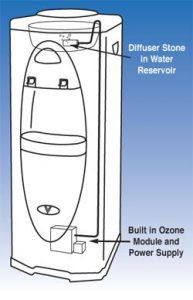 Ozone disinfection is the final step in your bottleless office or home water filtering and purification processes. A small ozone generator is attached to the outside of your bottle-free water cooler and dispenser. This generates tiny ozone bubbles into the water cooler reservoir which instantly get to work oxidising and killing all microbes, bacteria, viruses, molds and other organic matter. The only chemical residue as a result of the oxidation process is oxygen gas itself which is released back into the atmosphere. This means that the Ozone Sanitizer only needs to cleaned out occasionally and far less than with other bottle-free water disinfection methods.

Ozone sanitation does not affect either the taste or odor of the water.

Send Us a Picture of Your
Water Filtration System and We'll Tell You!
Call UsE-Mail