The water cooler, a familiar office fixture and an increasingly common home appliance, is set to make waves in the bottled water industry. Sales in this market have grown dramatically in the last ten years as more and more people have become aware of drinking water problems. The future of this market looks to be even more successful. However, typical water coolers presents some equally typical concerns for their users; posing the risk for back injury, heavy bottles must be lifted and set in the unit; and the reservoir itself can become contaminated or unsanitary, presenting a potential health risk due to increased bacteria counts and other airborne contaminants. In response to these concerns, several innovations have recently appeared on the bottled water market, including the bottleless water cooler, a unit which eliminates heavy lifting and minimizes the threat of bacterial contamination.

Bacteria in the water

Traditional water coolers involve changing the water bottles on a regular basis. Though the water inside the bottles is usually clean and pure, the outside of the bottle (particularly the neck) can become contaminated through handling. Everyone who handles that bottle, from the factory to you, has picked it up by its neck. When the water bottle is placed on the cooler, the neck sits inside the coolers reservoir, inadvertently introducing bacteria, unless you sanitize it with some disinfectant first. Additionally, as water is consumed the air is drawn in from around the bottle introducing to the drinking water airborne contaminants. In time, the bacteria and the airborne contaminants will continue to increase and collect unless the customer regularly cleans and sanitizes the water cooler they use. In a study conducted at Boston’s Tufts University, bacteria counts from 10 water coolers on campus were found to be “four times the 500 organism limit the government recommends.” With increased bacteria counts, users increase their risk of contracting gastroenteritis, an illness characterized by vomiting and diarrhea.

More and more, businesses are becoming aware, often through litigation, of back injury risks to employees who engage in heavy lifting. In addition to the threat of employee injury, consumers may also shy away from bottled water due to the delivery schedules, maintenance and storage of the bottles themselves. Simply put, many people would rather not hassle with the lifting up or the pickup and delivery of water bottles, nor do they have the extra space to store the bottles once they arrive.

The Self Filling Solution

The bottleless water cooler is a unit that is designed to be plumbed into the home or buildings water supply. That raw water is processed through a state-of-the-art water filtration system. This bottled quality water is automatically stored in the water cooler where it is chilled and heated for use. As it is consumed, the unit automatically refills itself. Since the bottleless water cooler is a sealed system airborne contaminants are never introduced to the drinking water. Additionally, contaminated bottlenecks are never turned over into the water you are about to drink. And just think, no more bottles to lift or to store ever again. Not one, ever. 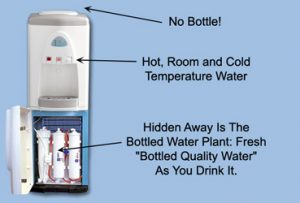 Send Us a Picture of Your
Water Filtration System and We'll Tell You!
Call UsE-Mail